I've wanted to create a video where I give advice to young programmers for months now and I've never had the chance until now. I bought a new camcorder this week and will now be doing more vlogs regularly. This is the first vlog of many.

I know that I am still young myself and advice like this should probably be coming from more experienced and older programmers however I feel that I have gained enough experience and learned enough to be talking about this subject. I believe the tips and advice I give in this video for young programmers are really important and useful. They should definitely focus and follow this if they're serious about their future career in programming.

Here is the video:

I actually think that some of the advice I gave in this video can also be applied to other jobs and careers that is not about programming and for non-programmers from outside the programming world.

I hope you enjoy the video and that it helps and inspires you!
Posted by Shaun Roselt at 1:46:00 AM 3 comments:


Here is the video:

If you're interested in more Delphi training videos then check out my Delphi Programming Playlist on YouTube.
Posted by Shaun Roselt at 3:56:00 PM No comments:

Delphi Programming Helper is on the Windows 10 Store

Its been almost a year since Microsoft released the Desktop Bridge (formerly known as Project Centeniaal) that allows developers to package their Win32 apps as AppX apps and publish them to the Windows 10 Store. Embarcadero released Delphi 10.1 Berlin Update 2 a few weeks ago and this allows Delphi developers to package and create AppX apps from within the Delphi IDE.

There's already been hundreds of developers porting their apps to Windows 10 using the Desktop Bridge. Delphi developers such as Marco Cantu has also taken advantage of this and published his own Windows Store app, My MiniFigures.

Last week I started the journey of getting my own app, 'Delphi Programming Helper' ready for the Windows 10 Store and today is the day. DPH is now officially published in the Windows 10 Store ☺. This is very exciting news for me as I have been using the Windows Store on a very active basis ever since Windows 10 came out and I really love the store.


I think every Delphi developer should take this opportunity and chance to publish their Delphi apps to the Windows Store. If you've developed any cool Windows Store apps using Delphi then I would love to see it, leave your app name and/or link in the comments.

Download DPH on the Windows Store here: https://www.microsoft.com/en-us/store/p/delphi-programming-helper/9mtrd2ptbvcp
The EXE version for none Windows 10 users can also download it on Softpedia here: http://www.softpedia.com/get/Programming/Other-Programming-Files/Delphi-Execute-Files-Helper.shtml
Posted by Shaun Roselt at 6:49:00 PM No comments:

The 11th edition of the free online CodeRage sessions will kick off on the 15th of November 2016. It is dubbed as Productivity, Platforms and Performance. 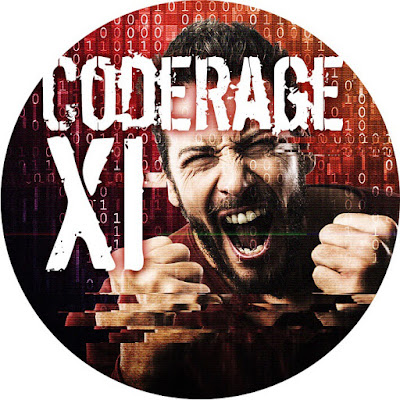 The sessions will be available for replay after it is finished live, but you will only get a chance to participate in the Q&A if you attend the live sessions. The sessions is there for all skill levels. You can get ready for CodeRage XI by downloading a free trial of RAD STUDIO Enterprise, https://www.embarcadero.com/products/rad-studio/start-for-free

The following things will be talked about:

You can really learn a lot by watching the upcoming CodeRage as well as the past CodeRage sessions from previous years. You can read more about it as well as register at https://community.embarcadero.com/article/technical-articles/16433-coderage-xi-productivity-platforms-and-performance


Here is a YouTube Playlist from previous CodeRage sessions about Delphi:

On the 8th of September in 2011 I created a personal YouTube channel. I started uploading videos about gaming, tutorials, skateboarding, vlogs and just random videos. By the time I reached grade 9 (2013) I had over 200 subscribers and videos with thousands of views. I was able to reach quite a big audience (in my eyes) and I really liked it. Some people in my school started watching my videos as well as some teachers. Eventually my principle started complaining about my videos and I was suspended several times due to videos. The principle said that my videos is giving the school a "bad name" and I was forced to remove all of my videos.

2015:
In 2015 I decided to try and give YouTube a chance again. I decided to make educational videos. So this was when I explored the possibility of creating gaming tutorial videos, but my computer was not good enough for this. I then decided to make Delphi programming videos and I published my first few videos on YouTube again about this.


2016:
This was an exciting year for 'Delphi Programming Helper' and my YouTube channel. I started uploading videos on a regular basis as well as update DPH. My Delphi programming videos became an important part of DPH. I created a whole playlist dedicated to teaching Delphi to absolute beginners and this playlist is now built into DPH.


I hope to have more than a hundred Delphi programming videos by the end of 2016.

2017:
In 2017 I would like to have a lot more videos and the videos should be more deeply integrated into DPH. I want to be writing my own Delphi book for beginners as well during 2017 and become a lot more involved in the Delphi community. I would also like to try and become a certified Delphi developer through Embarcadero. I think becoming certified will help when promoting my work.

Thanks for reading. You're welcome to leave comments and give me feedback on my videos and even suggest new videos and I will try to make them.
Posted by Shaun Roselt at 3:40:00 PM No comments:

Today I thought I would blog about my app, 'Delphi Programming Helper'. I want to explain how it started out, how it evolved in the past three years and what I plan on doing to evolve it in the next three years.

2013:
I was extremely motivated to change the world and make a difference. I wanted to learn how to program a computer and become the next 'coding sensation'. So my journey began and I started learning how to write some HTML code. I wanted to create my own text based game.
The text based HTML game I wanted to create was called 'Delphi Wars' and through a lot of research and learning HTML as well as working on the game, I discovered a programming language called Delphi. So around August 2013 I started learning the Delphi programming language from a book called 'Creative Programming in Delphi' by Marietjie Havenga and Christina Moraal. I used a trial version of Borland Delphi 7 and this is where all the fun started. By November 2013 I was already planning an app that can somehow help me become a better programmer and so I started making an 'HTML Helper' as well as an 'HTML and Delphi Color Picker'.

At the start of 2014 my 'HTML and Delphi Color Picker' grew extremely big with over one million lines of code and my computer could no longer handle the project due to my low system specifications and poor code writing style. So I had to come up with something else and start over. By that time I was using the 'ShellAPI' unit more and more and I got lazy to retype the code I use in it. So I created a simple app to help speed up my development when using the ShellAPI.

2014-2016:
This app kept evolving and eventually became what 'Delphi Programming Helper' is today. Here is a few screenshots of different versions:

I'm really excited to see how DPH will become bigger and better in the next three years. 2015 was a very slow growth year for DPH, but in 2016 it got about 2000 downloads on Softpedia and I improved it a lot during 2016. I hope to keep improving it in 2017 and gain much more downloads. I'm especially excited to be publishing DPH in the Windows 10 store.

If you have any questions and/or feedback/suggestions for me about DPH, then don't hesitate to leave me an email message. I would love to hear from you.

Thanks for reading and I'll see you in the next post. Byeeeee!

The start of something awesome!

Hi everyone. For those who don't know me, my name is Shaun Roselt and I'm a South African Delphi hobby programmer.

I know there is already so many great Delphi blogs on the Internet, but I would like to attempt to add my new blog to the list of great Delphi blogs. I wanted to create this blog three years ago already, but I just never got to it. Now I finally got to it and I'm excited. My blog posts will be about everything I find worth blogging about in the Delphi community.

Today I would just like to introduce myself and the blog. So here is a list of stuff about me and this blog:

The Blog will contain:

Thank you for reading. I will try and post at least once a week and on everything post worthy in my eyes. The next couple of posts will be about stuff I like which relates to Delphi in some way. Stay tuned.

Shaun Roselt
Hi. My name is Shaun Roselt. I'm an 18-year-old South African programmer and technology enthusiast. I've been programming since the age of 15. I worked as both a web and software developer in the 'real world'. Since the age of 15 I developed, tested and published over 10 apps for Windows as well as over 5 websites. I enjoy making apps, games and websites for all major platforms. My hobbies and interests are programming, gaming, technology, science, astronomy, learning and helping people.